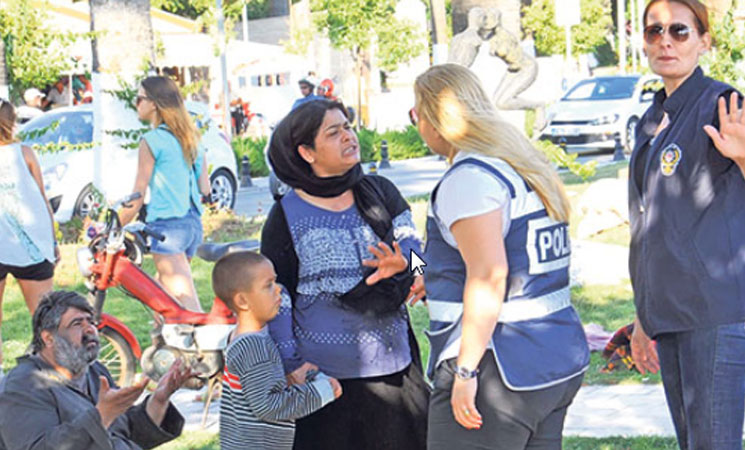 The presence of thousands of Syrian refugees who occupy streets and parks in popular coastal towns in the Aegean and Mediterranean regions has negatively affected the tourism sector in those regions, with business owners and tourism employers calling on authorities to take the necessary precautions to provide refugees with appropriate accommodation opportunities.

One of the most popular destinations for tourists in Turkey, particularly in the summer, is the southern province of Mu?la. The province’s popular districts — Bodrum, Marmaris and Fethiye – were recently flooded with Syrian refugees. About 4,000 Syrian refugees stay in gardens and parks in various parts of those districts.

Bodrum is one of the most popular destinations for foreign tourists who prefer to have a vacation in Turkey. There are hundreds of Syrian refugees in the parks and streets in Bodrum. A number of Syrian refugees are waiting at a park near the Bodrum Marina. Some those Syrian refugees ask for help from tourists in the town via banners that read: “We are from Syria. Can you help us?” The fact that some of the refugees even go aboard ships and yachts and ask for money and food frightens tourists.

One tourism sector employer told Sunday’s Zaman: “The humanitarian tragedy in Syria is really heartbreaking. However, here [Bodrum] is one of the most popular tourism centers. The park opposite the marina is full of Syrian refugees. Those foreign tourists who come to Bodrum via their yachts for a summer vacation are met with this dramatic image [Syrian refugees living in the park]. Furthermore, Syrian refugee children beg for money in the streets of the town and disturb tourists. We call on the authorities to find a solution for this problem as soon as possible.”

Similarly, tens of shop owners in Bodrum recently launched a petition against Syrian refugees and presented their petition to Bodrum District Governor Mehmet Gödekmerdah and Bodrum Mayor Mehmet Kocadon on Tuesday. The shop owners warned that tourism activities are negatively affected due to Syrian refugees walking around downtown.

Considering the petition, the mayor and the district governor ordered the police and municipal police officers to collect Syrian refugees from the touristic areas in the city. About 100 Syrian refugees were collected from the streets and were moved to the garden of a school. The locals are regularly providing them with food and other aid.

Speaking with Sunday’s Zaman, one of the shop owners in Bodrum says their work is negatively affected by the presence of Syrian refugees in the town. The shop owner says: “Those refugees have accommodation, food and clothing problems. We try to provide the aid for those refugees as much as we can. However, there are images at the parks and streets that cause trouble for us. If it continues like this, the town will be full of refugees. The tourists are really disturbed by the existence of the refugees in the town. The authorities should provide the refugees better conditions outside Bodrum.”

Bodrum Hoteliers Association President Halil Özyurt, speaking to Sunday’s Zaman, said that the business owners and locals are disturbed by the presence of Syrian refugees in the tourism town, adding: “We recently visited the Mu?la governor [Amir Çiçek] regarding the problem. We discussed what should be done without hurting those people [refugees]. The fact that they stay at those places near the sea is not acceptable. A temporary shelter was recently prepared to accommodate the Syrian refugees in the province on an order from the governor.”

Commenting on the issue, Bodrum Mayor Mehmet Kocadon told Sunday’s Zaman that some initiatives have been underway to provide accommodation for the refugees. “The business owners frequently complain about the Syrian refugees. Our district governor’s office, the police and gendarmes and civil society organizations will hold meetings to have a consensus on the problem. The fact that the refugees are living under poor circumstances upset all of us.”

Releasing a written statement on Friday on the refugee crisis in Bodrum, Bodrum Deputy Mayor Taner Uslu stated that the district governor’s office, the municipality and civil society organizations have taken the necessary precautions to prevent Syrian refugees from damaging tourism activities in the town. “We are aware of a social conscience and humanitarian responsibility [towards the Syrian refugees], but our most crucial priority, as the Bodrum Municipality, is to ensure the economic and social quality of our locals and preserve their peace,” Uslu also added.

As a country lying on the route to many European countries, Turkey has become a center of human smuggling, particularly since the 1990s. Since the costs of arranging illegal passage to European countries via Turkey are lower than other routes, human smugglers see Turkey as an ideal country for transporting migrants and refugees.

The number of illegal immigrants seeking to get to Europe via the Aegean and Mediterranean Seas is on the rise each year. According to the official data, a total of 11,919 illegal migrants, mostly Syrian refugees, have been caught while attempting to travel from Turkish coasts to European countries by illegal human traffickers in the first six months of 2015.

The Turkish coast guard caught 12,884 illegal migrants during 2014 and 6,937 illegal migrants in 2013. The number of migrants who were able to reach European countries without being captured is not known.

Evaluating the rising number of illegal migrants in the last few years, Association for Solidarity with Refugees (Mülteci-Der) President Eda Bekçi told Sunday’s Zaman that Syrian refugees resort to illegal immigration because they are desperate.

Mülteci-Der is an organization advocating for refugees’ rights. “The sole way to stop illegal immigration is to stop wars. When wars stop, those people will also stop escaping from their country. Unfortunately, such incidents will never end, unless wars come to an end,” Bekçi said.

A Prime Ministry Disaster and Emergency Management Authority (AFAD) report released early in May indicates that the number of Syrian refugees in Turkey is 1,600,000, but the actual figure is thought to be around 2 million.